A blog post dedicated to the dramatic 1986 Candidates’ match between Artur Jussupow (USSR) and Jan Timman (Netherlands), which was won by the Soviet grandmaster by the score of 6:3 (+4, -1, =4).  It features translations of the contemporary annotations by Jussupow’s trainer, Mark Dvoretsky, supplemented by notes and comments by the two players.

Artur Jussupow, pictured in play in the 2nd game of the match. (Photo: J. Klok, ANP.)

Timman had qualified for the Candidates matches by defeating ex-World Champion Mikhail Tal in a playoff for fourth place in the Montpellier Candidates’ tournament.  (Details on that match can be found in an earlier blog post.)  The first three places in the tournament in Montpellier had been shared by Jussupow, Vaganian and Andrei Sokolov.

According to Dvoretsky, there was a certain amount of debate over the timing of the match, with the Dutch federation asking for it to be postponed by a couple of weeks.  Eventually, the Soviets met them half-way and the match began a week later than originally intended.  Jussupow, to Dvoretsky’s surprise, had agreed to play the match in the Dutch city of Tilburg, on the basis that where was considerable experience in holding important events there (the ‘Interpolis’ series of super-tournaments had been a regular feature of the chess calendar since the late 1970s).

The Dutch grandmaster had as his seconds Ulf Andersson (Sweden) and Eric Lobron (West Germany).  Jussupow would be assisted by his long-term mentor and trainer, Mark Dvoretsky, and by his friend and colleague, Sergei Dolmatov.  The Soviet delegation was headed by the master Mikhail Beilin, a “level-headed and intelligent man”, in Dvoretsky’s words.  Going into the match, Dvoretsky states that Timman, the strongest Western chessplayer at that time, was considered a “clear favourite.”

The drawing of lots took place in Tilburg on 14th January 1986, with play beginning two days later at the offices of the Interpolis insurance company.  The match was scheduled for ten games.

The players at the drawing of lots. (Photo: R. Croes / ANEFO, via the Dutch National Archive.)

In the 1st game Jussupow (white) took advantage of some provocative play by Timman in a Nimzo-Indian Defence, and soon gained a large advantage with the help of a positional pawn sacrifice.  However, running short of time, the Soviet grandmaster failed to play in the most decisive manner and in what must have been a shocking reverse, he began the match with a loss. 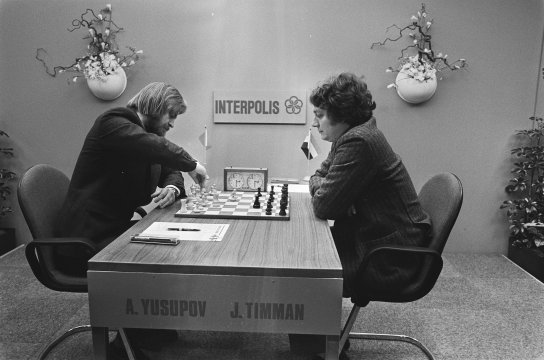 Another photo of the 1st game in progress (via http://www.brabantserfgoed.nl). 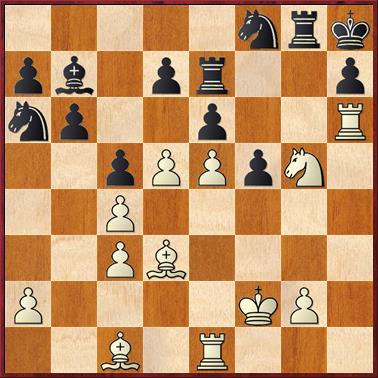 In the 2nd game, Timman produced a novelty against Jussupow’s Russian Game, as a result of which Black was saddled with doubled, isolated pawns on the queen’s flank.  However, rather than defend these, Jussupow again elected to give up material for positional compensation, “in the spirit of the Marshall Attack”, in Dvoretsky’s words.  Ultimately he held the draw without any difficulty.

The 3rd game was an epic affair.  On this occasion Jussupow switched to the Queen’s Indian Defence, but played the opening rather uncertainly, and in the early middlegame the Dutch grandmaster stood significantly better.  However, at the 20th move he committed a significant error and by the adjournment he was fortunate to still be in the game after Jussupow missed at least one very promising continuation.  Eventually, Timman managed to hold an instructive opposite-coloured-bishop endgame with two pawns less. 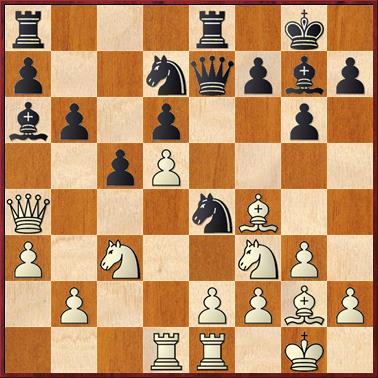 While the first three games of the match had featured positional pawn sacrifices, the 4th featured a piece sacrifice while still in the opening.  Jussupow resurrected an old idea in the Classical French (one which gained some brief popularity in the years that followed).  Confronted with this sharp line, Timman thought for around an hour over his 14th move, and came up with a new continuation which, however, was good for no more than equality and an eventual draw.

The 5th match-game proved to be the turning point.  Improving on his play in the 3rd game, Jussupow gained the initiative with another positional sacrifice of a pawn.  Timman failed to defend in the best way, and after missing a drawing chance just before the end of the first session, the game was adjourned in a rook endgame that was won for White.  On resumption, Jussupow made no mistake.  Thus, at the half-way point the scores were level with one win each, and three draws.

The 6th game was unquestionably the best of the match.  Timman chose a very aggressive line against the solid Queen’s Gambit Declined, with castling queen-side for White.  The Soviet grandmaster reacted equally aggressively, counter-attacking with his king still in the centre and, yet again, sacrificing material – this time an exchange – for the initiative.  After some uncertain play by Timman, Jussupow took the full point in a game that was subsequently (in volume 42 of Chess Informant) judged to be one of the best played in the first half of 1986.

After this dramatic defeat, Timman declined to take the time-out that was available to him.  In Dvoretsky’s opinion, this was a serious mistake.  In the next game the Dutch grandmaster switched to another of his favourite opening systems, the Grünfeld Defence.  In the Classical Exchange Variation he tried the very unusual 7…b6, perhaps in the hope that Jussupow would be unprepared for such a sideline.  If so, he was to be disappointed.  In this game Black suffered a decisive reverse and had to resign as early as the 19th move.  The score was now 4½:2½ in favour of Jussupow.

After this third successive defeat Timman did indeed take a time-out.  In what was effectively a must-win game for him, he again opened with the queen’s pawn, but was unable to make any headway in the Exchange Variation of the Queen’s Gambit Declined.  Jussupow was now only a ½-point from victory in the match.

In what proved to be the final game, Timman once again employed the 7…b6 sideline in the Classical Exchange variation of the Grünfeld.  Jussupow varied his play from the 7th game, and objectively speaking Black gained a satisfactory position.  However, forced to play for a win, Black played somewhat recklessly and after snatching White’s a-pawn his queen was unable to come to the defence of his king.  Jussupow broke through in only 24 moves to win the game and the match. 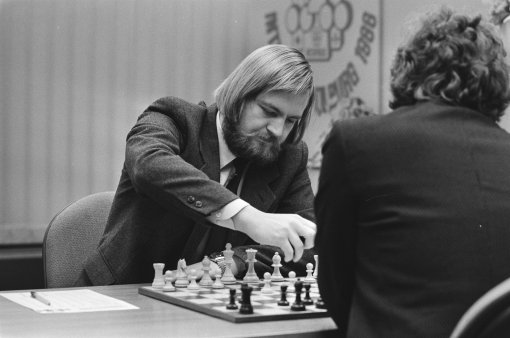 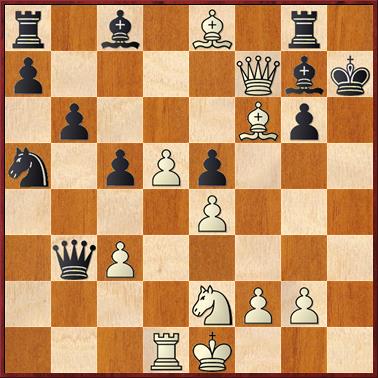 The final position in the 9th game, after Jussupow’s 24.Be8!

Dvoretsky later had this to say about Timman:

A chessplayer of an active, fighting style, he willingly goes in for tense, confused positions.  However, in so doing he often under-estimates the enemy threats and passes the boundaries of permissible risk.  In tournaments of mixed make-up such a tactic usually brings him success, but in battles with leading grandmasters this trait becomes a weakness, perhaps the main one in Timman’s game.  Jussupow was able to reveal in during the course of the match.

The sporting atmosphere in the match seems to have been exceptionally good.  Thus, when it was discovered before play began that Timman’s ‘rest lounge’ was located immediately next to the press centre, Beilin’s discussions with the match organisers were interrupted by Jussupow, who simply stated that he trusted Timman not to take advantage of this.  Later, when Timman decided to take a time-out following his crushing defeat in the 7th game, he advised Jussupow of his intention to do so immediately, rather than waiting until the following day.

The audience during the 8th match-game. (Photo: R. Gerrits / ANEFO, via the Dutch National Archive.)

Mark Dvoretsky’s annotations to the games of the match have been published in number or sources.  His contemporary notes were published in the Soviet magazine Chess in the USSR.  Translations of them are available to download at the following links.  (The exception is the 3rd match-game, which is annotated by Timman; Dvoretsky’s comments have been incorporated.)

Jussupow went on to face Andrei Sokolov (who defeated Rafael Vaganian in the other Quarter-final in Minsk).  Their semi-final took place in Riga in the autumn of 1986.

Background on the match is given in Mark Dvoretsky’s 2012 work, Kniga dlya druzei i kolleg.

Dvoretsky’s annotations are from the Soviet magazine Shakhmaty v SSSR (№ 4 & № 5, 1986).  Additional variations by the players are from volume 41 of Chess Informant.  Timman’s annotations to the 3rd game are from Timman’s Selected Games (Cadogan, 1995), originally published as Chess the Adventurous Way (Interchess, Alkmaar, 1994).

2 thoughts on “The Jussupow-Timman Candidates’ Quarter-final (Tilburg, 1986), with annotations by Dvoretsky.”